Never in my life did I think I would start a blog at some point. Especially not about a life with cancer. I guess everybody can imagine doing nicer things. But as we all know life can be a huge asshole sometime, and in the end we can’t chose our destiny. Well.

Before I start posting stuff about the endless stupidity in some of the reactions regarding my illness, about wanna-be doctors and all kinds of escapades and ignorance (no hate, some people apparently just don’t have a plan at all. I mean, who enjoys spending their free time googling cancer without a reason, I guess nobody does), I wanna tell you about the facts. What exactly am I suffering from? How did I find out? What kind of treatment am I going to get? How am I doing so far? And so on… I think understanding my disease will help you understand my future posts.

So, let’s get into it: Once upon a time, it happened to be a sunny spring evening, a girl noticed something weird inside her throat after coming home from a long day at work.

I photographed a wedding the whole Saturday, it was super warm and I felt exhausted. While I was eating dinner back home I had problems swallowing. It felt like there were sticks inside my throat. The next day I thought it might just be some really bad muscle soreness, maybe I hadn’t warmed up properly before dance class on friday night. Didn’t want to overdo the worrying again and be the hypochondriac as always, so I just endured it. And almost died.

What I had blanked out was that my overall fitness seemed to have been gone completely since a few weeks already. I needed an oxygen tent, as if running the New York marathon, everytime I walked one flight of stairs. Plus, I had the feeling of food being stuck inside my chest everytime I ate.

My neck continued swelling and on Wednesday evening after teaching my dance classes nothing seemed normal anymore. At that time my nails already turned blue by just moving a bit.

3rd of May
This date will be stuck in my head forever. Early in the morning I went to the doctor (fighting for air the whole time) and after he did an ultrasound of my neck, it all happened super fast. From this moment on I knew something was wrong. The ultrasound worked for around three seconds until the doctor stopped and got another doctor inside the room. After another three seconds, she got the same distraught look on her face and immediately called an ambulance. They took me to the hospital with a suspected thrombosis. I wasn’t allowed to move at all. I was panicking like crazy thinking: F*CK!!! HELP ME!! NOW! I DON’T WANT ANY OF THAT!! THROMBOSIS??? DAMN!! Now I wish it all had just been a f***ing thrombosis. (I know, one could also die from that.)

Four hours of tests (angiography, otolaryngology, MRT) later I found myself in front of a crowd of doctors, who surrounded my wheelchair (still wasn’t allowed to move). The only thing they said: WE FOUND SOMETHING AND NOT LITTLE. One of the doctors introduced herself as an oncologist. Eva again didn’t have a clue. ONCOLOGY? WHAT WAS THAT AGAIN?? Short clearing up. And the world stopped turning. I don’t remember a lot of that day, the only thing I do know is that I never felt anything like that.
I got transferred to the intensive care unit. The suspected thrombosis was in fact an upper venous congestion. The tumor grew around my windpipe and esophagus (that’s why I had problems with breathing and swallowing), as well as all my veins. Because of that the blood in my throat couldn’t drain anymore and the vein was three times bigger then usually. The first diagnosis (thymoma) was shocking. I would have had only a few months left to live. Like I said, life is an asshole. First bitchslap. And it was a big one. 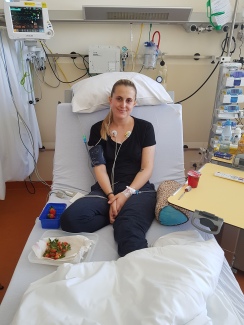 The doctors took a tissue sample the same day but it didn’t bring any results. Before they could get enough tissue I suffered dyspnea under general anesthesia and they had to stop. The next day they tried again, this time with local anesthesia in CT. I was able to see the friendly doctor enthusiastically pile a huge injection into my chest. With a nice panoramic view and a local anesthetic that would have probably only make a mosquito bite comfortable. I immediately got an anxiety attack (of course I did, I hate injections, yuck) and couldn’t breathe properly. DON’T MOVE! WE DON’T WANNA PUNCTURE THE LUNGS. Yeeeeeah, that’s exactly what you wanna here in that moment. Greatest experience of my life. 5 stars on TripAdvisor.

Fortunately, all of this bullsh*t was worth it, because after the first results they gave the all-clear signal. Yes, I could die. But only, if they wouldn’t have done anything against the upper venous congestion immediately. They told me one week, maybe two. After that I would have suffocated or suffered an apoplexie. But the final diagnostic findings of the tumor read diffuse large B-cell lymphoma. LYMPHOMA?? NEVER HEARD OF THAT. HOW DO YOU GET THAT?? Nobody was able to answer that but everyone knew: the chances of healing are pretty high. Even though I nearly suffocated, the tumor is malignant and not operable, 14 x 7,5 cm large and growing extremely fast. But the quick growth also means quick cell division and thanks to that the chemo works especially well.

The same evening I got an injection of a chemomedicine (Vinchristin) and radiation of my chest. The radiation therapy was repeated in the following two days. Since it was the weekend they couldnt do anything more than that. On Monday I felt much better, so they let me leave the intensive care unit. Not in life-threatening condition anymore, the tumor shrank already. Hell yeah! Second bitchslap, but this time it was my turn to slap.

On Tuesday the world already looked a little different. We had gained some time. But then it all just started. Bone marrow puncture. Under general anesthesia. But as I woke up, I had the worst pain of my life. The whole day I nearly fainted. The rest of the week I was busy getting different operations done, that are necessary before you get the first complete cycle of chemotherapy. For example a port was transplanted under the skin near my collarbone (a membrane of ca. 2 cm with direct access to my veines and heart). Through this port the toxic chemo can be injected safely. Otherwise it could for example deaden the vein and numb the arm forever. But they did need two attempts to install the

port. Sometimes it all goes wrong.

After they finished all the chopping around my body, I got antibodies (Rituximab) on Friday and Saturday and chemo on Sunday.

I’m now looking forward to five cycles of chemotherapy in a 14 day interval (in case my blood levels are fine). Blood draw every week. germ-free food (NO SUSHI! HEEEEELP!!!). Different pills every day to prevent side-effects. Loss of hair and fatigue. Not yet nausea. All in all I’m doing well. Not according to circumstances blabla, no! I’M REALLY FINE! I’m surprised myself that my body handles this so well. I’m working, dancing, doing things. Slower than usual but I’m doing them. I’m so incredibly thankful for the support I received from my family and friends in the first weeks. Everyone was so optimistic and helped me being positive myself. Nothing better could have happened to me during this difficult time.

So, now you know what’s going on with me. If you have made it until here, respect! Thank you for reading. And now that you got all the facts, I can’t wait to share some of the bullsh*t I experienced since my diagnosis. Go get some popcorn, folks!